This is an open-access article distributed under the terms of the Creative Commons Attribution Non-Commercial License (https://creativecommons.org/licenses/by-nc/4.0), which permits unrestricted non-commercial use, distribution, and reproduction in any medium, provided the original work is properly cited.

Abstract
Anthracofibrosis is luminal narrowing with a black anthracotic pigmentation on the bronchial mucosa. Extrapulmonary anthracofibrosis is very rare in head and neck region, and anthracofibrosis associated with adhesion to adjacent tissue can be misdiagnosed to malignancy. We report a rare case of a paraesophageal anthracofibrosis in a patient with advanced papillary thyroid cancer. The paraesophageal anthracofibrosis presented as a black colored hard mass with severe adhesion to the recurrent laryngeal nerve (RLN) during thyroid surgery, suspecting metastatic lymphadenopathy. With intraoperative frozen biopsy, unnecessary aggressive surgery with the injury of RLN can be avoided. Permanent histopathological examination of the mass revealed anthracofibrosis with strong positivity on Masson’s trichrome staining. This case highlights that anthracofibrosis should be included in differential diagnosis of paraesophageal masses, and frozen sectional biopsy can help in decision making during surgery. In addition, collagen might be involved in the adhesion of the anthracotic mass to the surrounding tissues.
Keywords : Anthracosis, Fibrosis, Lymphatic metastasis, Papillary thyroid cancer

A 76-year-old woman presented with a several-year history of anterior neck swelling. The patient had a history of hypertension. She was a non-smoker and did not have a history of pulmonary tuberculosis. She did not have a familial history of thyroid disease. Thyroid ultrasonography (US) revealed a 1.8×1.7× 2.2-cm hypoechoic, ill-defined mass with microcalcification and extrathyroidal invasion in the right thyroid gland (Fig. 1A). In addition, the thyroid US showed a 5.7×3.4×5.9-cm mixed-echoic mass on the left side (Fig. 1B). The patient underwent US-guided fine needle aspiration biopsy in the right thyroid mass. Cytologic examination of the right thyroid mass was consistent with papillary carcinoma. Flexible laryngoscopy revealed normal vocal cord movement. Neck computed tomography (CT) with enhancement showed a 2.2×1.8×1.4-cm irregular subtle enhancing low attenuated nodule with calcification and extrathyroidal extension in the right thyroid gland, and a 7×4.5×5-cm heterogeneously enhancing mass on the left side (Fig. 2). Neck CT scan did not reveal any significantly enlarged lymph nodes in both lateral necks. The patient underwent total thyroidectomy with central compartment neck dissection. After thyroidectomy, a 1.5-cm black-colored, right paraeso-phageal mass, suspected as metastatic lymphadenopathy, was identified under the right RLN (Fig. 3). The paraesophageal mass was severely adherent to the RLN. Thus, it was not possible to remove the mass completely without injuring the RLN. To determine the need for shaving the RLN, intraoperative frozen sectional biopsy of the mass was performed, which revealed a negative result for malignancy. The surgery was terminated without attempting complete excision of the mass for functional preservation of the RLN. Permanent histopathological examination of the mass revealed anthracofibrosis with no evidence of neoplasia. The pathologic findings of the mass showed anthracotic pigment deposition and dense fibrotic changes (Fig. 4). To evaluate the cause of the severe adhesion to the surrounding tissue, Masson’s Trichrome (MT) staining was performed. We compared the histopathological findings of four MT-stained samples. This case and another case with a paratracheal anthracotic mass had severe adhesion to adjacent tissues (Fig. 5A). In contrast, two other cases of level IV cervical anthracosis were incidentally detected without adhesion to adjacent tissues during neck dissection (Fig. 5B). A prominent increase in blue collagen fibers was demonstrated in cases with adhesion (Fig. 5A), when compared with that in the cases without adhesion (Fig. 5B). In addition, histopathological examination of the main mass of the right thyroid gland revealed papillary carcinoma with extrathyroidal extension involving the perithyroidal adipose tissue. The patient had an uneventful postoperative recovery with good vocal cord movement.

Fig. 1. Thyroid ultrasonography showing a 1.8× 1.7×2.2-cm hypoechoic, ill-defined mass with microcalcification and extrathyroidal invasion in the right thyroid gland (A) and a 5.7× 3.4×5.9-cm mixed-echoic mass in the left thyroid gland (B). 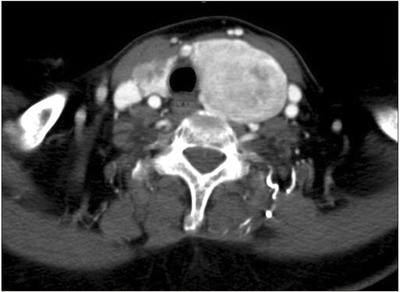 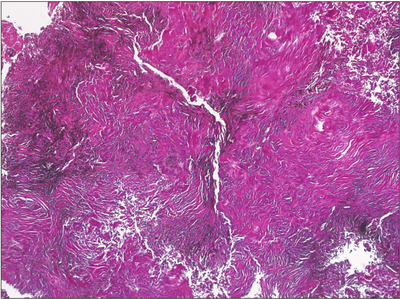 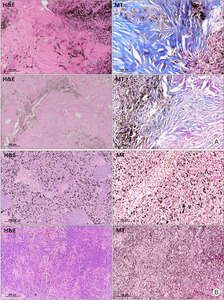 Fig. 5. Histopathological findings of Masson’s Trichrome staining (MT, ×200) in 4 cases with anthracosis. (A) This case and another case with a paratracheal mass had severe adhesion to adjacent tissues. A prominent increase in blue collagen fibers were seen on MT staining. (B) Two other cases of cervical anthracosis had no adhesion to adjacent tissues. These cases showed negative on MT staining (H&E stain, ×100).

MT staining is widely used as the collagen fibers are stained blue-green, and it has a greater contrast compared to hematoxylin and eosin staining.9) Therefore, MT staining is useful to differentiate between collagen and smooth muscle in tumors and determine the increase in collagen in cases of liver cirrhosis and kidney disease.9) Anthracosis could be incidentally detected during lower neck dissection, and unlike this case, it usually has no adhesion to the adjacent tissue. To evaluate the cause of the severe adhesion to the surrounding tissue in this case, we performed MT staining in four cases with anthracosis. In our cases, the anthracotic mass with adhesion showed prominent blue collagen fibers when compared to cases without adhesion to the surrounding tissues. These findings could signify that collagen is involved in the adhesion of the anthracotic to the surrounding tissues.

In conclusion, extrapulmonary anthracofibrosis, especially in the paraesophageal location, has rarely been reported, and it could mimic metastatic lymphadenopathy in patients with cancer. This case highlights that anthracofibrosis should be included in the differential diagnosis of paraesophageal masses, and the unnecessary aggressive surgery can be avoided with appropriate suspicion of anthracofibrosis. In addition, frozen sectional biopsy can help in decision making during surgery. Collagen might be involved in the adhesion of the anthracotic mass to the surrounding tissues.

No potential conflict of interest relevant to this article was reported.