This is an open-access article distributed under the terms of the Creative Commons Attribution Non-Commercial License (https://creativecommons.org/licenses/by-nc/4.0), which permits unrestricted non-commercial use, distribution, and reproduction in any medium, provided the original work is properly cited.

Abstract
Background and Objectives: Hepatic functions in patients with nodular goiter, who received long-term hormonal suppressive treatment was not well enlightened in publications. We studied liver specific enzymes activities in patients with nodular goiter after thyroidectomy. The aim of this study was comparative analysis of treatment outcomes of patients who were previously treated with L-thyroxine and were operated skipping hormonal treatment. Materials and Methods: 88 patients (basic group) with nodular goiter underwent surgical operation without any drug treatment. 86 patients in control group received hormonal suppressive treatment with L-thyroxine for 6-12 months and then underwent thyroidectomy. Liver ultrasound (US) scanning and laboratory tests were comparatively studied 3, 6, 12 months after thyroidectomy. Results: Patients that received long-term hormonal suppressive treatment and then admitted for surgery, suffered from discomfort in upper right abdominal quadrant. The ALT, AST, Alkaline Phosphates and GGT activity of those patients was increased, and steatohepatitis was identified in US investigations. Also, total bilirubin, especially the unconjugated fraction concentration was higher in control group. The hepatocytes functional activity in basic group was slightly affected. Conclusion: Long-term hormone suppressive therapy resulted in dysfunction of hepatocytes. It’s highly recommended to the patients with hormonal therapy resistant nodules to undergo surgical treatment.
Keywords : Thyroid, Liver, Nodule, Enzyme

Nodular goiter is one of the most common diseases among population, with incidence rate from 8% up to 21% in the region with iodine deficiency. Palpation, ultrasound (US) investigation, computer tomography and fine needle aspiration biopsy diagnostic methods contribute to detection of thyroid nodules and differentiation it from malignant neoplasm. Hormone suppressive therapy (HST), radioactive iodine treatment, laser ablation and surgical procedures were widely used in practices for the treatment of nodular goiter. Every treatment method has advantages and disadvantages. Therefore, there is not any clearly highlighted single treatment method of the benign nodules.1-3)

Surgery is the most preferred treatment method of the benign nodules suggested by endocrine surgeons. Due to high complications rate, cosmetic defects on the neck and other disadvantages of the surgical methods, most patients with benign nodules prefer HST with L-thyroxine. Although, the effectiveness of the HST in the context of decreasing the nodule size is controversial, some of authors show better outcomes of L-thyroxine therapy. However, the L-thyroxine has some side effects, such as altered mineral composition of the bones and increased risk of cardiovascular diseases.4-8)

Liver reacts to the processes of emerging and growth of nodules and hormonal changes in a thyroid gland. Liver is also responsible for metabolism of the L-thyroxine, and a long-term HST impairs hepatic functions. Right after thyroidectomy, all patients need replacement hormonal therapy, which in its turn overloads the hepatocytes. Some cases are reported the liver injury due to levothyroxine therapy.9-11) However, the changes in the hepatocyte functions in patients with nodular goiter after a long-term HST is not well enlightened in publications.

The objectives of this study were 1) to evaluate the predictors, which could be useful to identify thyroid nodules resistant to HST; 2) to define the impact of the long-term HST onto hepatocytes functions.

With respect to the objectives, study was performed in two stages using retrospective and prospective analysis of the patients’ outcomes. For retrospective analysis the results of one hundred forty-six (146) patients with nodular goiter treated in the Scientific Center of Surgery were used. The group comprised of 138 females and 8 males and average age was 44.8±1.03 years old. All patients received HST with L-thyroxine (100-150 μg daily dose depending on thyroid stimulating hormone [TSH] concentration) before surgical treatment. The patients that didn’t respond to hormonal treatment and the nodule sizes remained unchanged were subject to surgical procedure. The observation time from the start of HST until surgery was 5.5±0.45 years. The total thyroidectomy was the most performed surgery in patients with multinodular goiter.

In the 2nd stage of this study, one hundred seventy-four (174) patients with nodules resistant to HST in thyroid gland were analyzed. To identify patients with resistant nodules, indicators (predictors that have been revealed in the 1st stage of the study) that could help to predict the nodule sizes immutability after hormonal therapy, were used. All patients were informed about possible resistance of the nodules in their thyroid gland to drug therapy. After discussing available treatment methods, the patients were suggested to undergo surgery as a more efficient solution. Eighty-eight (88) patients accepted the surgery and were operated (basic group). Eighty-six (86) patients rejected operation and preferred HST (control group). Control group patients received HST with L-thyroxine and had been examined after 3, 6 and 12 months of the therapy. The ineffectiveness of HST for 12 months changed the decision of patients in favor of surgical treatment and they underwent the thyroidectomy. All patients had been examined after 3, 6 and 12 months of thyroidectomy, and the results were compared.

The concentration of hormones: TSH, T3 and free T4, also the thyroglobulin and anti-thyroid peroxidase concentration were examined in blood serum using standard methods. The patients had TSH concentration of 3.63±0.52 mlU/L, T3 was 7.81±0.47 μg/dL, free T4 was 1.04±0.07 ng/dL.

The activity of liver specific enzymes, such as alanine aminotransferase (ALT), aspartate aminotransferase (AST), alkaline phosphatase (AlPh), γ-glutamyl transpeptidase (γ-GTP); and the pigment metabolism products quantity, such as the concentration of total bilirubin and its fractions, were measured in blood serum. Laboratory tests were performed with automatic analyzer using standard reagents.

All data were gathered in Excel sheet, and then transferred for statistical processing in IBM SPSS-20 program. Continuous variables were expressed as Mean±median (M±m). Categorical variables are expressed as actual numbers and their percentages. The statistical analyze was performed with non-parametric Mann–Whitney U test and with the Student t-test. p values <0.05 were considered statistically significant. For the evaluation of different cut-off points ROC (receiver operating characteristic) curve were used. The ROC curve is a plot of sensitivity versus 1-specificity for all possible cut off values. The index of accuracy is the area under the receiver operating characteristic curve (ROC-AUC), where values close to 1.0 indicate high diagnostic accuracy, and the value of 0.5 indicates a test of no diagnostic value. p values <0.05 were considered statistically significant.

The retrospective study found that at 90 patients (61.6%) out of 146, HST prevented thyroid nodules from growing, but the decrease in the sizes of some nodules was not statistically significant. In these patients, the total volume of the thyroid gland was 53±5.85 cm3, right lobe was 28±5.03 cm3, left lobe was 24±2.63 cm3.

To determine the correlation between the nodule sizes, thyroid gland volume and the effectiveness of HST, ROC curve was used (Figs. 1, 2). The cut off for nodule size was ≥17 mm and for thyroid gland volume cut off measured as ≤15.8 cm3. The single nodules in thyroid gland, that didn’t increase in size were found to be resistant to HST. Presence of the single nodules and existence of the calcification in nodules were identified as independent risk factors. 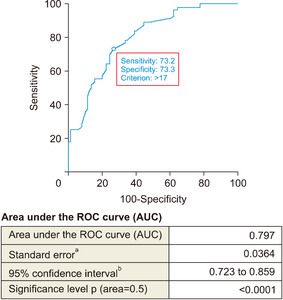 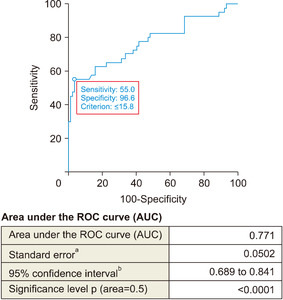 Concluding the results of the retrospective analysis the following facts can be stated: the nodules should be considered as treatment-resistant nodules if the nodule is larger than 17 mm, the calcification is found in the nodule, and the concentration of thyroid hormones in the blood is within the normal range. Retrospective analysis illustrates that hormonal drug treatment is not effective in patients with resistant nodules and does not require long-term treatment.

For the second stage of the study, 174 patients with resistant nodules were selected. Patients were informed about the results obtained in the first stage and surgery was suggested. 88 patients (basic group) agreed and underwent surgery. Liver specific enzymes, also bilirubin concentration was tested at admission day and 3, 6, 12 months after surgery.

86 patients (control group) did not agree with the operation and preferred HST. Patients in the control group were kept under observation. After 3, 6 and 12 months, they were examined and the ineffectiveness of HST was observed. After unsuccessful drug treatment patients were offered surgery again, and the surgical operation was performed. The liver-specific tests were performed continuously during all observation period and at admission day to hospital for a surgical intervention. The main objective was a comparative analysis of the liver functional status among patients, who agreed to surgery without previously drug treatment and patients who underwent a surgical operation after receiving a long-term HST (3-12 months).

Laboratory tests right before the surgery in both group patients 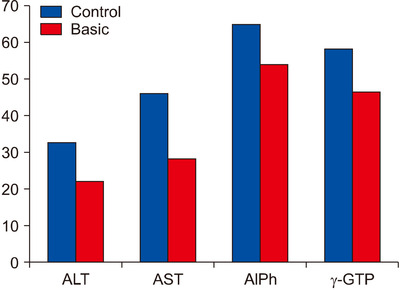 Even though the values of the AlPh and γ-GTP enzymes in the patients of both groups were within the normal range, the activity of these enzymes in control group was significantly higher when compared to the basic group.

The test results 6 months after surgery showed the further increase of the liver specific enzymes activity in control group of patients (Fig. 4). The activities of AlPh and γ-GTP also increased based on ALT and AST values. γ-GTP activity increased for 25% of its value and reached to 72.8±1.38 U/L. The investigations demonstrate the hepatocytes’ damage in control group patients after 12 months of surgery (Fig. 5). 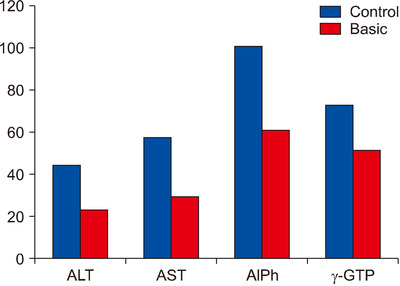 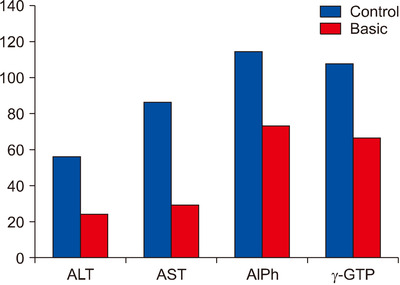 The concentration of total bilirubin in control group patients was higher than normal value (23.0±0.6 μmol/L) at the end of 3 months after the surgical operation. After 6 months, total bilirubin level increased by 4.6%, and at the end of 12 months after the surgery it increased by 31.2% up to 31.5±0.83 μmol/L. The study of bilirubin fractions revealed an interesting fact that there was significant increase in the concentration of free bilirubin. Changes in conjugated bilirubin remained within the standard values. Only 12 months postoperatively, in the control group of patients a slight increase of conjugated bilirubin (5.29±0.18 μmol/L) was observed. In the basic group the bilirubin fraction fluctuated within normal range.

During the hospital visits patients from the control group had complaints such as digestive discomfort, slight pain right upper quadrant of abdomen, and some other symptoms of impaired digestive syndrome. US examinations showed steatohepatitis in livers of patients, who received long-term hormone suppressive therapy. In some patients enlarged liver size was identified. The increase in bile dispersion, sludge, and precipitation of gallbladder were also observed during the studies. Due to bile dyskinesia the digestive process was disrupted and the floaties were observed. However, the patients that underwent the surgery without initial hormone suppressive therapy felt better. US examinations in basic group patients showed minor changes in liver parenchyma.

Analysis of the results showed that, liver function was impaired in patients after long-term treatment with L-thyroxine. Postoperative replacement therapy displayed the overload of hepatocytes. Significant increase in ALT and AST activity, which is the sign of hepatocyte damage in liver, was observed in patients that received a long-term HST. Changes in AlPh are not prognostic for assessment of liver function that is injured after long treatment with L-thyroxine. Conversely, the change in the activity of the γ-GTP was statistically significant when compared to the main group values and could be useful for identifying the hepatocytes injury during the long postoperative term.

Bilirubin concentration was increased mainly in its free fraction. Long-term hormone suppressive therapy resulted in fatty dystrophy of hepatocytes. Injured hepatocytes lost their ability to uptake free bilirubin in the blood. Unconjugated bilirubin is more toxic and led to intoxication and oxidative stress.

Nodular diseases of the thyroid gland require to choose an individual approach to treatment tactics, depending on the nodule size and gland volume. Based on the proposed algorithm, it is recommended to perform surgery in patients with treatment-resistant nodules, that can be identified with existence of predictors such as nodule size ≥17 mm; thyroid gland volume ≤15.8 cm3, single nodules with calcification. Hormonal treatment in patients with this contingent is ineffective, resulting in fatty dystrophy of the liver and dysfunction of hepatocytes.

No potential conflict of interest relevant to this article was reported.